Where have all the tradesmen gone? This is one of the most prevalent – and important – questions being asked in the construction industry today. Although the market has moderately rebounded from the throes of the Great Recession, many of the effects of the prolonged slump in housing and construction are still lingering. 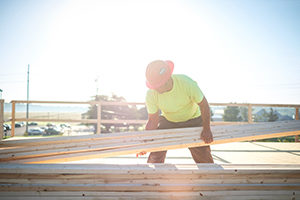 “Every three to five years we go through this cycle, but I’ve never seen it this bad and I think it’s attributing back to the recession. So many people left the workforce and started doing other jobs they thought were more secure,” says Wayne McMillian, Project Manager at Oswald Company. ”At the same time, you don’t hear a lot of people say, ‘I want to grow up to be a plumber, electrician, carpenter, etc.’ That’s the biggest issue.”

There seems to be an increase in the number of building projects coming down the pipeline, but there aren’t enough experienced tradesmen available to pick up the work. Project managers are chronically short-staffed and desperate to find skilled laborers who can not only hit schedule deadlines, but do the job right. In extreme cases – which, sadly, are becoming more common every day – contractors are sometimes forced to pass up attractive projects altogether, simply because there are no plumbers, drywallers, electricians, carpenters, etc., available to man the job. How in the world did we get here? Mark Strassmann with CBS News looks for an answer in “Rebuilding America’s Pool of Construction Workers.”

There are several key factors contributing to the dire shortage of skilled labor that the construction industry is currently facing:

“If someone says it’s not an issue, they aren’t really in the industry, because there isn’t a contractor I’ve talked to that works in the United States that isn’t having the exact same problem we’re having – can’t find enough people, material prices are increasing, material deliveries are taking longer than expected, very few people are keeping their commitments, because it is outside of their control,” says Ken Oswald, Chief Executive Officer at Oswald Company. “So we’ve had to, as a company, try to manage the expectation of the client and it’s challenging.”

In the short term, the void has been filled by the Hispanic workforce in trades like drywall and concrete. However, this demographic faces significant long-term challenges due to uncertainty around immigration policy and worker programs. Moreover, masons, plumbers, electricians, etc. are still in high demand and all trades going largely unfilled. So, how does the construction industry attract Millennials and Generation Z to the trade workforce? By raising the wage rate.

Although this shortage of skilled tradesmen in the construction industry has produced a “ripple effect” of several negative consequences (e.g., understaffed projects, increases in material costs, lack of competitive bidding, delays in project completion times, etc.), all is not lost. What might seem like a huge problem can actually be viewed as an outstanding opportunity for young people who are looking to enter into a career field that doesn’t require a four-year college degree.

In many ways, pursuing a career in the construction trade is a very smart occupational choice, because the demand for these highly specialized skills is off the charts right now, and the potential is virtually unlimited. With the help of organizations such as the Ohio Valley Associated Builders and Contractors and the Greater Cincinnati Apprenticeship Council, young workers can receive training, education and real-world experience through trade apprenticeship programs that can put them in a position to reap significant career rewards.

One thing is for sure: The demand for skilled tradesmen isn’t going away – if anything, it’s increasing every day. In our next post, we will dive into how Oswald and others are addressing this challenge by adding value to the trade industry. Stay tuned!